As a Young Inklings and Hillview Author Author teacher, I have hosted thirty-one class parties over the last three years. I’ve heard nearly three hundred kids – Kindergarten through age fourteen – read their original stories out loud to an audience.

Each student created something unique, from her own imagination. This story – brand new to the world but very close to her heart – she shared with others, some of whom she did not know.

This takes incredible courage. For boys and girls alike. 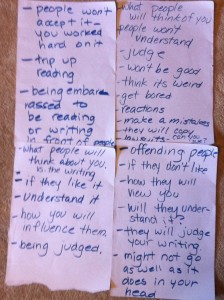 I usually ask the teenagers to list their fears the week before the reading. This takes a lot of paper. Fears about reading original work aloud include: “people won’t understand you, tripping up reading, being judged, being misunderstood, tripping up and other variations on what others may think.”

We discuss each of the fears. Unfortunately, these are rational fears. I never promise kids that these things will not happen. They might.

We can’t control what others think. We make mistakes.

I don’t tell students this, but I’ve seen worse things happen: accidents, tears or uncontrolled giggles. It’s scary to face your greatest fears while everyone is watching you.

Well, the kids in my elementary classes will tell you its because they get a cookie afterward.  At each party every kid gets a cookie. They know this from day one. Each student reads the story she has written aloud to an audience of other students and, if elementary kids, also parents – usually about 15 – 30 people. We talk a lot about this cookie for the nine weeks leading up to the party.

When we have writer’s block because we can’t come up with the exactly perfect thing to write, we talk about the cookie, and how many weeks it is until cookies. This might be a good time to go ahead write anything: it doesn’t have to be perfect. It just has to be ready for when we have cookies together.

It’s about the other part of the sentence: We will all have the cookies together.

Promising friends and families cookies for that support seems like the least we can do. And, certainly, when kids are this courageous, they must know they we will be there for them at the end. When they face their fears – and they are substantial: rejection, judgment, and failure – we will be there.

And, we want to know everything will be OK on the other side.

And that’s just fine with me. These kids are brave enough as it is.